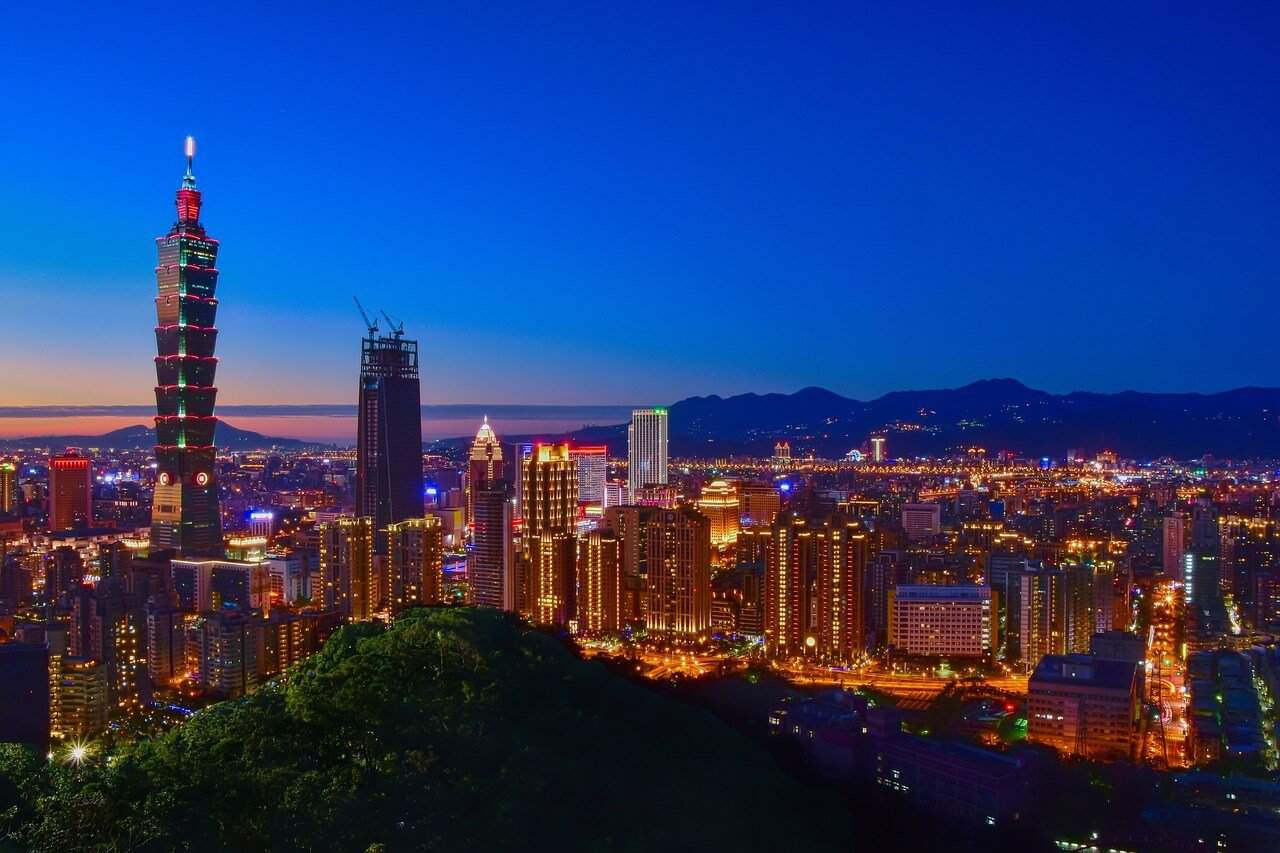 Webcam of Taipei in Taiwan

Right at the top of Northern Taiwan, the capital city and special municipality – Taipei, is the economic, cultural, political, and educational center of the country. The size and impact of the city shouldn’t be underestimated either, as it stands as a major hub in East Asia and houses many world-famous cultural and architectural landmarks.

These landmarks are great places to start any visit to the city. For example, Taipei 101 will be hard to miss. The 509-meter tower (1,671 ft) was considered to be the highest building in the world until Burj Khalifa in Dubai was finished.

That doesn’t take away from the fact that the tower still dominates the skyline of the city. Hundreds of meters above any other building, the observatory found at the 450-meter mark will give you the best view of the modern and bustling city. During the night, Taipei’s skyline looks absolutely magnificent, with all the nearby buildings lit in an array of colors.

The skyline is not where the wonders of nightlife end either, as the night markets found in the city will transport you to a world full of neon signs, bright lights, and absolutely wonderful street food.

Taipei is a big city, so you are not limited to a single market either, with some better for its views, while others provide a bigger range of products found on its streets, so if you choose the one that sounds the best for you or if you choose to go to every single one night after night, you are sure to find something to enjoy.

If you’re itching for some traditional architecture, the Bangka Lungshan Temple might just be the stop. Found in the Wanhua District, the oldest district in Taipei, it is one of the historic buildings found in the area.

The Bangka Lungshan Temple, also known as Mengjia Longshan Temple and Lungshan Temple of Manka, the former coming from the old name of the Wanhua District – “Monka” or “Monga”, is a Chinese folk religious temple. It provides a great contrast with the now very modern district, with contemporary apartment buildings seen in the background, while the very traditional temple stands in great condition.

The immaculate detail found all across the building is in a league of its own, with dragons, birds, tigers, and many other animals and figures found on the front gate. If you wanted to see a piece of history in the oldest district of the city, surrounded by modern life, this is a great location to visit.

If Taiwanese history interest you more, the Dalongdong Baoan Temple is a wonderful alternative. Found in the Datong district, it provides a similar flavor of the futuristic sight, the old mixed with the new.

Although this temple is not surrounded by buildings as tall as found in the Wanhua District and with the garden found in the temple, you can escape from modern Taipei for just a while, while you look around the immaculate temple left standing for over 200 years.

It replaced the original wooden temple from 1742 when it was built back in 1804. In the 50 years of Japanese rule, the temple has gone under multiple extensions and improvements. That is the temple you will find there today, awarded with an Asia-Pacific Heritage Awards for Culture Heritage Conservation by the United Nations Educational, Scientific and Cultural Organization – UNESCO.

The country and the city especially has plenty of these historic buildings to visit. From shrines to temples and mansions, you will surely find something to see no matter which district you choose to stay in. That goes to food too, with food both in every night market and every bustling corner, foods like Taiwanese Fried Chicken and Beef Noodle Soup will make your mouth water.

Taiwan is well known across the globe for its food and more so its plethora of vending machines, that unlike in the west actually serves high-quality product that includes anything from the usual drinks, the popular Taiwanese tea and even freshly baked pizza, you really can’t go wrong.

While Japan gets the most attention for its unique vending machine market, Taiwan is the place where you’ll find things you never expected to, with food that’s fresh and handmade – if you can’t stop for long enough to grab a meal from a proper restaurant, the vending machines will feed you just as well.

From its history to food, its night markets, and much more that just won’t fit into this article, the capital city of Taiwan is a great place to visit. But if you can’t leave your house just yet, feel free to take a look by using one of the free webcams you can find on this site!