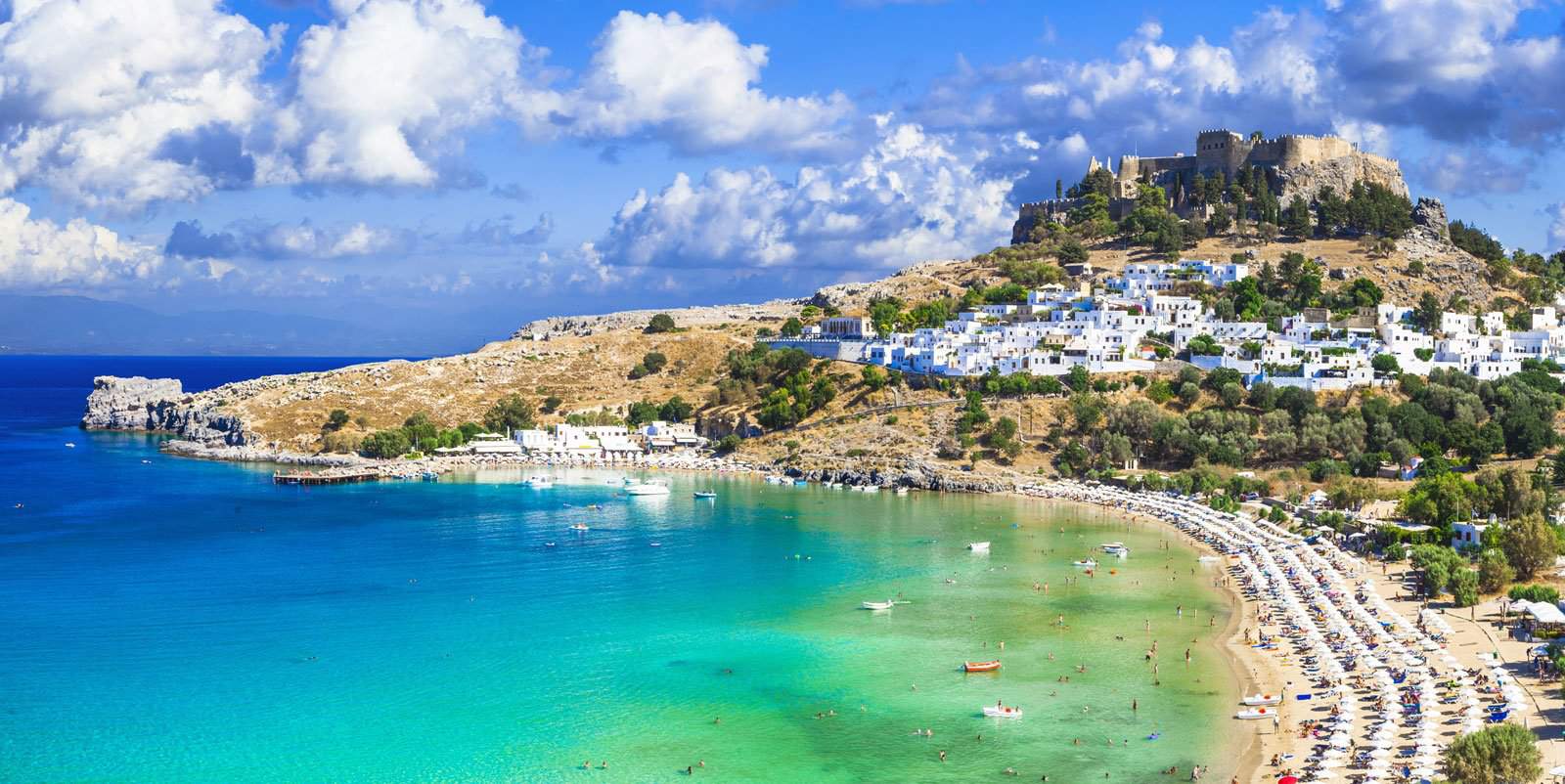 Webcams from Rhodes in Greece

To start off, Rhodes is the largest of the Dodecanese islands, right at the Aegean Sea, which is not that far from Turkey. But the nice climate is not where the appeal ends, as the old town, which is completely car-free is a pleasure to explore and soak in the atmosphere and architecture of an ancient Greek city.

And if you ever wanted to feel like you traveled back in time, to times when having a large fortress at the top of a mountain overlooking a beautiful white labyrinth of buildings leading to an astonishing beach with water so blue and saturated that you can’t keep your eyes away, was a daily thing, there’s no better place to experience just that.

Rhodes is a wonderful balance of vintage and exotic. It’s a breathtaking location, to say the least.

Once everything has soaked in, you can start off on your adventure in this historical city. One of the first things you’ll probably want to do is head to the Anthony Quinn Bay and indulge yourself in the beautiful water. The bay is definitely full of character and it might be a location worth of that travel pic that many will undeniably want to take.

But, if you were looking for a more traditional, sand-filled experience, then head to Prasonisi, which jumped straight out of a vacation destination pamphlet, with a large and just as beautiful beach, with both calm and windy areas, which creates the best place to both relax and catch some waves if you’re into that.

Once you’re done with the traditional travel indulgences, the next thing on the list might be the local sights and architecture, which would be a waste not to check out as Greece is well known for the amount of not only historical locations but great architecture in general and Rhodes doesn’t fall short, it’s full of sights that will satisfy any traveler.

For example, if you take your time to get up the Mt. Filerimos, you’ll find yourself in front of a breathtaking view overlooking the areas you just were in, the town, the beach, everything right in front of your eyes. While there, you might as well take a look at the monastery of the Virgin Mary, which used to be a catholic church.

This location is beautifully kept and will give you a decent look into how these types of locations looked without all the ruin, but if you feel like it just doesn’t scratch that itch of old-timey and you prefer your sights with some wear, there’s plenty to see as well.

If you head to the north-western shore of Rhodes, you’ll find yourself at the ruins of what once was one of the three big cities of the state of Rhodes – Kameiros. In modern times, this once city is now just ruins and is known by the Ancient Kameiros, but that’s not even close to what Rhodes can offer.

One of the biggest attractions of Rhodes has to be its old city, which is still completely enclosed and fortified by medieval walls and towers and is one of the best-preserved medieval cities in Europe.

This is where the car-free comes in as it is quite literally an authentic medieval city, with everything included, from the amazing brick wall surrounding the city, to the 13 bastion towers to narrow cobblestone streets that are a prime destination for a romantic night out. Inside, you’ll also find the Palace of the Grand Magister, which is more than a sight on its own.

There is probably no better place in Europe and arguably the World, where you can feel like you really traveled back a couple of hundred years to experience an authentic and pristine medieval city, full of everything you can hope for.

May it be for your own curiosity, or a romantic getaway to get lost in a world of fantasy, Rhodes is a wonderful and worthy destination that is worth a try, but if you still have doubts, feel free to take a peek using one of these free webcams, that will undeniably spark even more interest in this wonderful location.