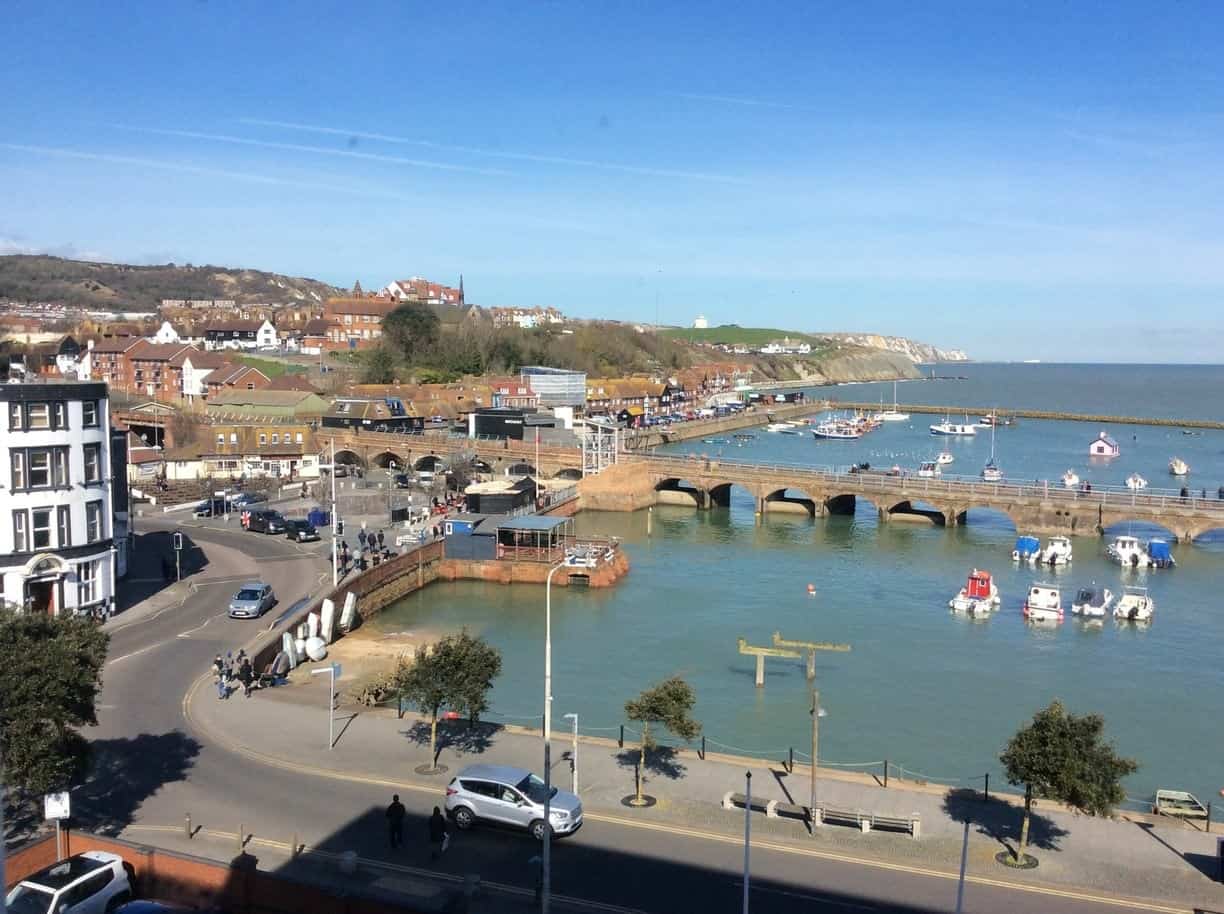 Folkestone is one of the many port towns found in England. Right on the English Channel, in Kent, south-east England, the town lies on the southern edge of the North Downs at a valley between two cliffs. It was an important harbor and shipping port for most of the 19th and 20th centuries.

There have been settlements here since the Mesolithic era and a nunnery was founded by Eanswith, granddaughter of Æthelberht of Kent in the 7th century, who is still commemorated as part of the town’s culture.

During the 13th century, it subsequently developed into a seaport, and the harbor developed during the early 19th century to provide defense against a French invasion and expanded further after the arrival of the railway in 1843.

Nowadays, the harbor is not in use to the same extent, even though the ferries are still active in the port.

Having the history out of the way, the place has exciting things to offer, from masses of Victorian architecture to beautiful waterfront parks, and a revitalized harbor, Folkestone has plenty to adore. As it’s been a defensive harbor it is no surprise that France is visible across the Strait of Dover.

A military canal, Martello towers, pillboxes, and bizarre “sound mirrors” stands as a reminder to when the threat of invasion was never far from people’s homes.

When it comes to visit-worthy spots, the Folkestone Harbor Arm comes to mind. During the 19th century, Folkestone’s harbor was dredged and screened by a long seawall that protects its south side. The Harbour Arm was hooked up to the Southeastern Railway’s London to Dover Line.

In the First World War, around ten million people passed through the harbor, which made it a massive hotspot. Passenger numbers on cross-Channel ferries dwindled after the arrival of the Channel Tunnel in the 1990s which meant that the old terminal, extending out to sea for several hundred meters, needed a new role, this is exactly what makes this location so unique.

Since the 2010s the harbor has been brought back to life, becoming a promenade and summer evening out destination, with street food stalls and live music. Mezze, barbecue ribs, cockles, or stone-baked pizzas, pick your favorite choice of food, and enjoy the view of the town and its cliffs.

Keeping up with the theme of combat, the Kent Battle of Britain Museum is a great location if you are interested in the events of the World Wars. The museum, which is housed inside of a hangar, is the most detailed museum to cover the conflict since the 1970s.

The museum has been supported by many World War Two pilots who donated uniforms, medals, documents, photographs, and many other personal items.

There are also artifacts from around 700 crashed aircraft on display, as well as pieces relating to the German V-Weapons, autographs by pilots, full-sized Spitfire, Messerschmitt, and Hurricane replicas. To say the least, if this is a topic that interests you, this is one of the best locations in the country to visit.

But Folkestone doesn’t fall short as a seaside getaway either. The Sandgate Beach might not be the typical beach you would find yourself on during a vacation, but if you enjoy a nice stroll alongside the seaside, Sandgate will meet you with a promenade running several miles.

If you feel like going for a swim though, Sunny Sands might be the spot for you. It might as well be the perfect locations for such a city, sand perfect for sandcastles, terraces to relax and enjoy the view, food nearby or just the beach to enjoy the water. Located right between The Stade on the harbor and the Country Park is the sandy beach with families in the summer.

If the buzz of such gatherings does not entice you, the East Cliff and Warren Country Park could be the quiet getaway you need. It is a 300-acre park combining cliffs, beaches, and terraced habitat formed by hundreds of years of landslips. Residing in the lush vegetation are over 300 types of moths, as well as the only grayling butterfly colony in Kent.

So if you want to go on a hunt to find as many of these night critters as you can, you might not find a better place than this. But if you just want to grab a quick glance at the coastal city, feel free to use one of the live webcams on this page!