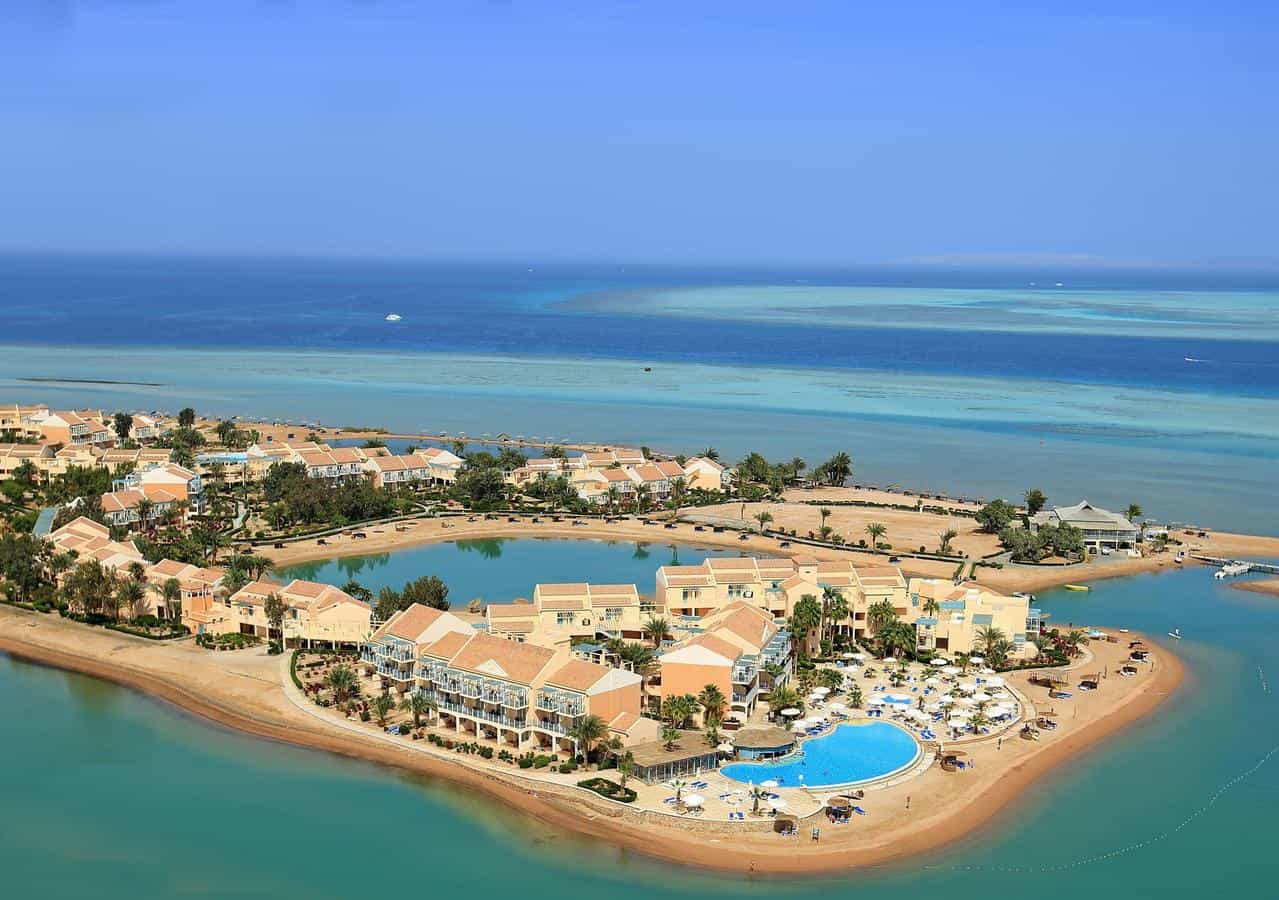 Known by the name “The Lagoon” and built solely for tourism, El Gouna is an Egyptian dream getaway full of everything you would home from a tourist resort built to last.

The resort’s development dates back to 1989 and is a project of Samih Sawiris and the Orascom Hotels and Development company. It is a part of the Red Sea Riviera, the eastern coastline along the Red Sea of Egypt.

The resort has not only 10 kilometers of coastline, but also includes 20 islands that are surrounded by lagoons. Not to mention, that the town is just 25 kilometers away from an airport, or if your budget doesn’t have limits for vacations, the town itself houses a private airport.

The local architecture is quite unique. While the outer appearance might fool you to think it’s what you would expect from traditional Egyptian rural architecture, keep in mind that the city has only been in place since 1989.

The buildings found across the resort seem authentic because a plethora of influential American and European architects designed the buildings to resemble their authentic counterparts, especially the Nubian villages and the Egyptian Countryside.

The resort city specializes in water-sports. That includes such activities as snorkeling, waterskiing, parasailing, kitesurfing, windsurfing, and scuba diving. With the aforementioned 20 islands, there’s plenty of beaches to choose from, with quite a few situated on their own individual islands.

And we’re not done with large numbers just yet, in line with the beaches and islands, the resort is also home to around 18 hotels, ranging from three to five stars, with the crowning jewel, the six-star La Maison Bleue hotel.

As the city is built for entertainment and leisure, it’s not a surprise that somewhere in between all the pristine architecture and man-made islands, you are able to find a gold course.

In theme with the rest of the resort, it’s no ordinary gold course either, as it’s been designed by Gene Bates, a professional Australian cyclist, and Fred Couples, a former World No. 1 professional golfer, that has 64 professional tournament victories under his belt. If you ever wanted to tackle a course made by professionals for the best possible experience, look no further.

An establishment that might not come to mind at first, but highlights just how specialized the city is has to be the international hospital found in the city. While other resorts might stop at baseline medical treatment, the El Gouna International hospital is able to provide a wide range, including plastic surgery, pediatrics, dentistry, and ophthalmology.

It also extends into an intensive care unit and decompression chamber, which is in place due to the possibility of diving accidents. The hospital by itself heavily highlights just how catered the entire city is. If you wanted to escape from the rest of the world and spend your days on an extended vacation, this city is more than ready to accommodate.

Of course, a proper resort wouldn’t be complete without a plethora of other activities, and El Gouna does not disappoint. From a go-kart track to an aquarium, a tennis court to a paintball arena, an entire football stadium, and much more, the city lives up to being a world-class resort.

The local climate will satisfy anyone looking for a good tan. Whilst rather toasty year-round, there’s quite a bit of fluctuation throughout the year. During the winter months, you’ll see the lowest temperatures at around 15 to 20 degrees Celsius, while the summer months really heat up, reaching a high of 30 to 35 degrees Celsius.

If a completely catered and seemingly perfect vacation with wonderful beaches and blasting heat is something that’s on your mind, El Gouna is a place to remember. But if you still crave just the smallest of looks into what the city can offer, feel free to take a look by using one of the free webcams you can find on this site!