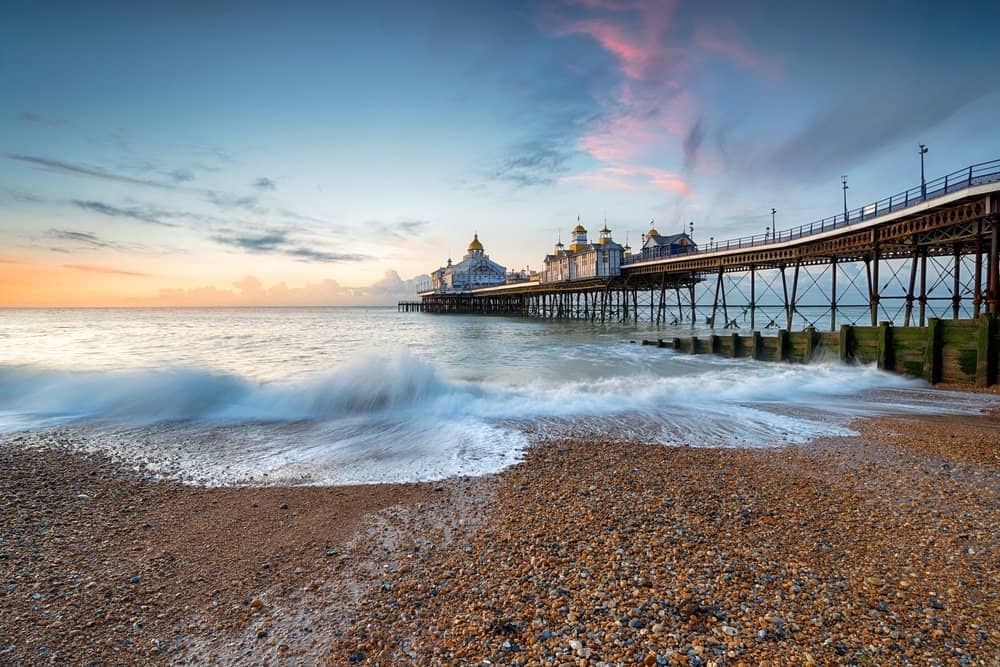 Webcams from Eastbourne in the United Kingdom

Even though the United Kingdom is not known for its beaches, you can still see absolutely breathtaking scenery near the shoreline. One such location is Eastbourne in East Sussex, found right at the edge of southern England, near Brighton.

The location is famous for its chalk sea cliff, Beachy Head, which is the highest in the entirety of Great Britain.

Eastbourne on its own is a great town to explore, with many buildings from the Victorian and even the Medieval era, that can be seen in pristine condition, all across . In combination with inoffensive weather and being situated near the seafront, Eastbourne is a picturesque location for a getaway.

One of the highlights found in town has to be the Eastbourne Pier, a gorgeous example of Victorian architecture found by the seaside (which you can see using the live webcam on this page). Built in 1870, the pier provides a superb view of the town and includes quite a few tourist attractions, such as restaurants, an arcade, and souvenir shops.

It is a location you wouldn’t want to miss if you find yourself at this seaside resort.

The most scenic location in the region is undeniably the Seven Sisters, a series of chalk cliffs sprawling from Cuckmere Haven to Birling Gap in East Sussex. The hike across them, from Seaford to Eastbourne, has been described as an unforgettable experience. Covered in a thin layer of green grass, the towering white cliffs create a striking image, that seemingly keeps going for as far as you can see.

The actual length of the hike is around 22 km (13.6 miles) and takes around 7 hours to finish. The hike starts at the Seaford beach and ends at the beautiful Eastbourne Pier. The entire journey greets you with a beautiful landscape that is picture-worthy no matter how far the hike you find yourself in.

Another great location in Eastbourne is the Towner Art Gallery, founded in 1923, it offers a more than modest collection of over 4000 oil paintings, watercolors, sculptures, and more. Due to its location, it also features many pieces relating to Sussex artists, including both traditional and modern works.

The building itself has also shed its simple, yet modern white exterior, for a colorful display by the artist Lothar Götz for its 10th anniversary in the Rick Mather Architects-designed home, where the gallery is currently located.

For a taste of the 19th-century heritage, the Redoubt Fortress is a wonderfully kept piece of history, that nowadays serves as a place for regimental museums, stargazing, movie screenings, and lectures. Back in the 1800s, the fortressed served as a part of a sophisticated network of defenses and now stands as a great centerpiece, that comes to life during the moths of summer.

Bandstand, completed in 1935, found above Eastbourne’s main resort beach, is said to be a sensational place to enjoy open-air concerts. Including a middle and upper balcony, surrounded by a blue fence, the bandstand can’t be compared to any building in the UK. Around 150 concerts take place in this location a year and on set days you can even catch a firework show.

When it comes to grabbing a bite, the town provides a wide range of cuisines, from Japanese to Italian, to fresh seafood that you can enjoy while gazing over the English Channel. The nightlife is just as varied, with traditional night clubs, cocktail bars to pubs right on the edge of the Seven Sisters.

From food to drinks after the town has plenty to offer, that will leave most visitors satisfied.

Eastbourne is a wonderful location that sometimes gets overshadowed by the more popular nearby town of Brighton, but where the latter is known for its beach, futuristic projects, and the pier, which is the biggest tourist attraction outside of London, the prior offers an experience more akin to what you would expect from Scotland.

The Seven Sisters create a breathtaking scenery that is hard to forget.

The chalk cliffs, lifted by the same tectonic plate movements that formed the European Alps, create an image not only worth taking a picture off, but that has been used in both film and television, due to their scale and appearance.

The destination is worth the time and if you find yourself nearby, it is definitely worth a look.