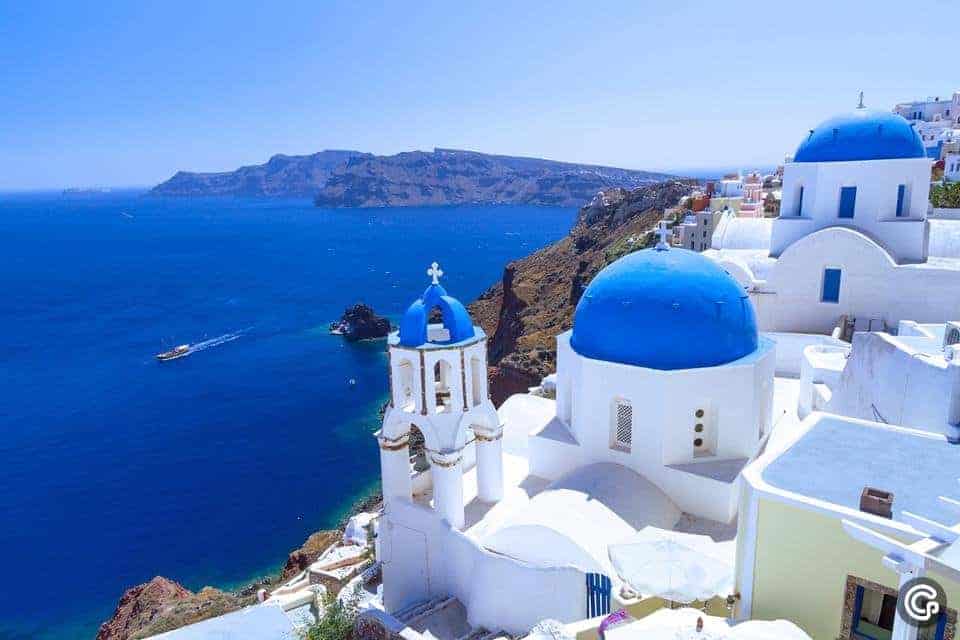 In the southern Aegean Sea, the island of Santorini is the largest island of its archipelago. It is also the site of one of the largest colanic eruptions ever recorded, which happened over 3600 years ago, so there’s nothing to worry about if you’re thinking of ever visiting the island – there’s plenty to see and everything is more than intact.

Nowadays the island serves as a picturesque getaway, with white, blue-roofed buildings, mountainous terrain, and a plethora of beaches. With almost 2 million travelers visiting the island on a yearly basis, the island has ranked as a top tourist destination on multiple magazines and lists.

The beauty of the island is most likely one of the first things that will surely wow you, as both during the day and night, the scenery shines. During the day, you are met with the traditional greek buildings and large mountains carving the skyline and during the night, you see the towns light up and glow in the night with colors anywhere from blue to purple, red, and yellow. It is a sight to behold.

Another large part of the local economy besides tourism is the wine industry. The industry bases itself on the indigenous grape variety found on the island called Assyrtiko. The crowning jewel of this industry is the strong and sweet dessert wine called Vinsanto, which literally translates to Holy Wine.

It is made from the best dried Assyrtiko barries and goes through a long barrel aging process that takes around 20 to 25 years. The flavour, color, and process of making this wine have made it renowned worldwide. Other wines produced on the island are just as worth a try and have their place as a local specialty that you won’t be able to get elsewhere.

As a greek island, you can expect to find wonderful spots of ancient greek architecture. The architecture of Santorini is similar to other small local islands, that are grouped under the name of Cyclades. The cubical houses are made of local stone that has been whitewashed with various volcanic ashes with occasional blue roof introducing color to the scenery.

Unfortunately, the volcanic eruption more than 3500 years ago was not the only unfortunate disaster to struck the island, as around the 50s the islands suffered from an earthquake that has done quite a bit of damage to the town, with half of the buildings being completely destroyed.

Thankfully half of the buildings have been repaired and restored with many buildings still standing today. There are actual ruins as well, with the ancient city of Akrotiri which was destroyed in the aforementioned volcanic eruption in 1628 BC. Because of the unfortunate demise of the city, it lead to many objects being preserved as the city got covered in volcanic ash.

The excavations are now kept in a museum, away from the outside climate in the modern city of Akrotiri. In the museum, you are able to walk around the excavated ruins, look at recovered pottery and greatly preserved frescos from the prehistoric era. This city has been suggested as the inspiration for Plato’s story of Atlantis.

The island also offers many regular touristy attractions, like the amazing beaches found all across the island. There are around 20 beaches you can choose from, all of them providing something different and unique. For example, the Red Beach found outside of Fira has earned its reputation with its unique looks.

The red-colored cliffs with the potently colored blue water create absolutely beautiful views. It is located in the Akrotiri area, so if you choose to visit the ruins of the prehistoric city, you might as well visit one of the most beautiful beaches in Greece.

Another great option is the Vlychada beach if you actually want to go for a swim. On the southern side of Santorini, it is a nicely set up long strip of beach where you are guaranteed to get to enjoy the great Aegean Sea. With temperatures reaching 30 degrees Celsius, you are in for a good time.

But if you are yet to pick your next vacation destination, feel free to take a look by using one of the free webcams you can find on this site!