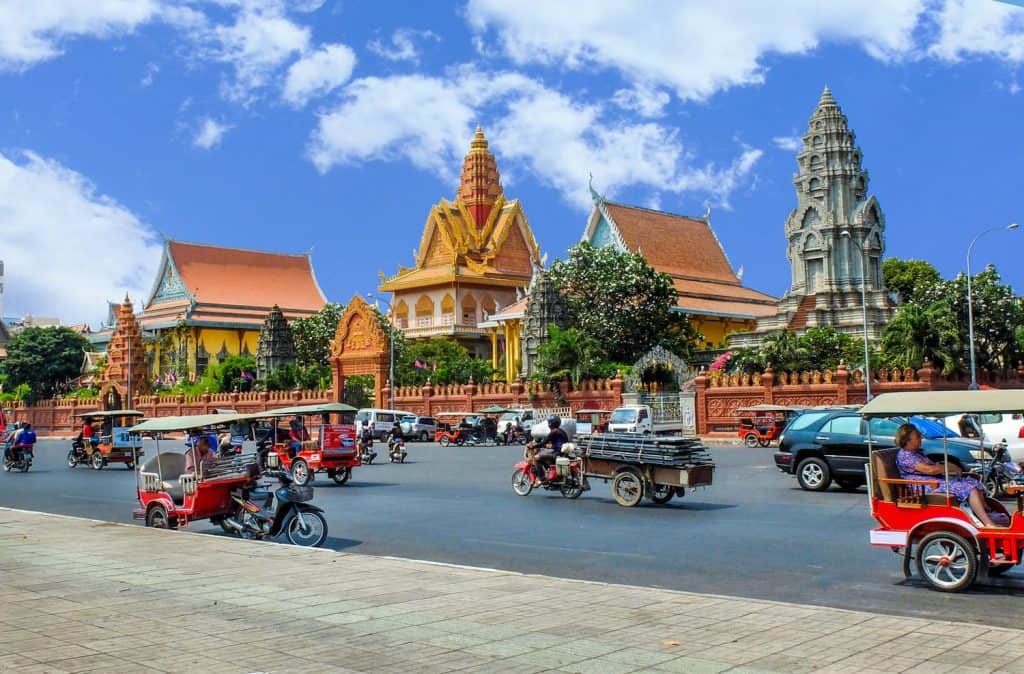 The economic and cultural center of Cambodia – Phnom Penh, once known as the “Pearl of Asia” is now a city full of history and magnificent sights loved all across the globe.

Cambodia is well known for its temple complex Angkor Wat, which is the largest religious monument in the world, at least based on land area. The monument’s magnificent scale is worthy of its reputation and it even earned itself a spot as the symbol of Cambodia, appearing on the national flag.

And while the historic building is located in Siem Reap, around an 8 hour trip from the capital city, Phnom Penh has plenty to offer on its own and is more than worth a visit.

For example, if you’re looking for gorgeous architectural sights, both the Royal Castle and the Silver Pagoda are absolutely astonishing examples of Cambodian architecture. Located next to each other, they make for wonderful spots to visit, as they have a lot to unpack when it comes to its presentation.

The Royal Palace is known for many things, one of them being the Emerald Buddha, a crystal statue revered across the globe. It is not known of what stone the statue is carved from – jasper, emerald, or jade, but that does not take away from how impressive and clear the statue looks.

Seated on a gilded platform, it grabs the attention of anyone that enters the Silver Pagoda, also known as the Temple of the Emerald Buddha.

Another similar building that you might find on your journey through the city, just in a different, red, tint of paint – the National Museum of Cambodia, is just as worth a visit. Serving as the largest cultural history museum, you won’t find a better place to learn about Cambodian history.

The museum is home to exhibits that go as far back as the 4th century. Due to its reputation and history, it now not only houses the largest Khmer artifact collection but also overlooks the entire museum ecosystem in the country. While maybe not as glamorous as the Royal Castle, the architecture and the surrounding area around the museums is a wonderful example of Cambodian craftsmanship.

The garden courtyard that includes 4 lotus pools, statues of the deity of death, and other noteworthy features, makes for a great location to visit, as it offers both the looks and the knowledge.

Cambodia is home to many exotic animals. From elephants, bears, leopards, crocodiles, and much more, the country’s wildlife is diverse and renowned for its variety and list of endangered or rare species. Phnom Tamao Zoo found around 20 kilometers outside of Phnom Penh, is a wildlife rescue center and Cambodia’s largest zoo.

Opened just 20 years ago it serves as a sanctuary for rescued exotic animals, that have been saved from illegal wildlife traders and traffickers. Nowadays the so-called zoo houses over 1000 animals, not including the hundreds of exotic birds and reptiles.

A surprising highlight found in the establishment is the sun bear sanctuary, the largest in the world. With Asiatic black bears and Malaysian sun bears rescued from the black market, the enclosure is backed by an Australian organization, has been established to protect and preserve these bears.

Inside the enclosure, you’ll see swimming pools, toys, hammocks, and anything else to make the environment as great as it can be. This, alongside the enormous list of animals housed in the Zoo/Rescue center, makes it an absolutely amazing place to visit for anyone interested no only in wildlife, but also what Cambodian nature can offer.

Cambodia is well known for its tropical setting, and with temperatures averaging around 27 degrees Celsius year-round, you are bound to have a great time no matter what time of the year you choose to visit.

The only noticeable factor is rainfall, as the winter and early spring months see lasting periods of drought, with the summer months increasing in rainfall up to 2000% – 255 mm (10 inches) of difference in precipitation. So if you like dry heat or moisture alongside it, you have both of the options on the table.

But if you still have to stay in the comforts of your home, feel free to take a look by using one of the free webcams you can find on this site!