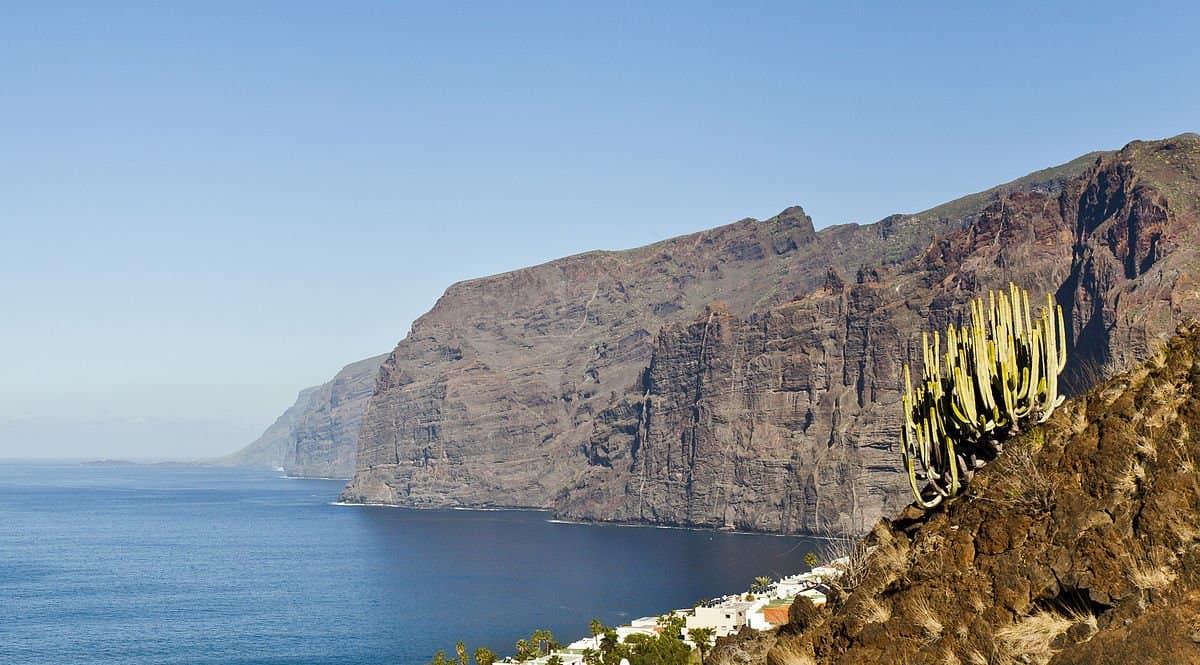 The Canary Islands draws visitors from Europe and around the world to bask in its natural beauty and its wonderful holiday resorts.

Los Gigantes (The Giants) is a municipality in the largest of the Canary Islands, Tenerife. Its name comes from one of the most memorable features of the regions, the giant rocks.

The rock formations west Acantilados de Los Gigantes, rise from the sea and reach heights of 500-800 meters. The cliffs are a huge tourist attraction because of their natural beauty and wonder.

The Cliffs of Los Gigantes are also very historically significant to the island’s protection throughout the centuries. When early explorers and invaders of the island would approach, locals would stand on top of the cliffs and throw rocks down on the ships.

This was a very effective defense for the island, luckily today, rock defense is no longer practiced.

Los Gigantes was a stronghold for the island when Spain first declared it as their own 5 municipalities of Tenerife decided that they would not allow Spain to claim the island and banned together to fight back using the cliffs at Los Gigantes as their primary form of defense.

The island’s indigenous people were the Guanche Berbers who it is believed migrated from nearby north Africa. There is no evidence than any other people lived on the islands before the European settlers arrived.

While most of the culture and language of the Guanche Berbers has been lost there are still some that remains. Words that are relative to agriculture can often be heard uttered by the locals.

Today Los Gigantes is a melting pot of people from around the world, many of whom came for a holiday and decided it was the perfect place to retire or live permanently.

Los Gigantes did not become a tourist destination until the 1960’s. While many other areas on Tenerife were enjoying a great deal of tourism from the 1930’s on, Los Gigantes was a bit behind the power curve when it came to attracting tourists.

Juan Manuel Capdevielle is largely accredited with seeing the tourist potential in the region and pushed to have the infrastructure built that would bring in the tourism.

The Royal Sun Resort is one of the only high-rise resorts in Los Gigantes proper, but there are many villas, smaller hotels and apartments in the area as well. Of course, the resort and hotels offer all the amenities that you would expect to find at a holiday retreat and does a booming business year-round.

Here you will not find many tall buildings, most of the buildings are low rises to preserve the wonderful ocean view and the view of the cliffs.

There are no night clubs or late-night bars on this section of the island but there are nightlife options a few short meters away at the Puerto de Santiago and Playa del Arena the resort towns neighbors.

Life on Los Gigantes is slow and relaxing. The Marina is the hub of all the activity. The smallish Marina has slips for over 400 boats and is surrounded by restaurants, cafes and shopping.

A favorite activity is to sit in one of the outdoor café areas enjoy a meal and watch as the boats (some of them quite grand) come and go with the beautiful cliffs as their backdrop.

One of the big draws to this side of the island besides the amazing cliffs is the black beach! Black beach is a stretch of beach with black sand.

Los Guios Beach is a natural beach located right next to the Marina, it is 180m long and covered in the natural black sand of the island.  It is the only beach in Los Gigantes.

Most of the beaches on Tenerife are naturally black sand beaches because of the volcanic activity of Mouth Teide but “golden sand” has been imported from the Sahara Desert to create the golden sand beaches on other areas of the island.

At Los Gigantes, because of the natural geography finding any type of beach that is swimmable can be difficult but that is not what people come here for. The rocky bottom of the sea floor makes it dangerous for any type of play in the ocean, but Los Gigantes has a solution for those that want to bath safely.

Club Oasis has a lawn for sunbathing and a pool with slides, there is also a bar and restaurant on site. You do have to pay a fee to enter both places, but the fee is small, and it is a great experience.

Crab Island is home to a natural lava rock pool.

You should always be cautious when bathing in one of the rock pools on the island especially when the ocean is rough. People have been dragged out to sea from the pools. Always move with caution and pay attention to the warning flags that are posted.

There are opportunities for water equipment rental like boats and jet ski’s so you can get an upfront look at the cliffs via water craft. This region is well known for its whales, dolphins and abundant sea life that either passes by during migration or calls the area their permanent home.

Day excursions for deep sea fishing and kayaking are available at the marina. There is some of the best deep-sea fishing in the world from this region thanks to the outcrop of rocks that provide plenty of habitat for sea life.

There is wildlife on the land too! Lizards are pretty much everywhere on the island and seemingly are not to afraid of humans. You can find them basking on rocks and logs but no worries these are just small lizards, the big lizards are on El Hierro a small island in the chain.

There is lush beautiful fauna through out the region thanks to the volcanic ash that has been infused into the soil. It is a wonderful area that is lovely year-round.

This is the resort town you come to when you just want to get away from it all and relax. This seaside town delivers the opportunity to take in your natural surroundings while enjoying delicious food prepared from the freshest ingredients available.

There is not a lot of excitement or adventure to be had but it is a lovely sport of families and people that are committed to relaxation.

Getting around town is easy, you walk. The hilly terrain and narrow roadways are best conquered on foot. As a matter of fact, you can walk to the two nearest resort towns as well.

There is a high number of Brits that live in the area which makes it easy for English speaking tourists to communicate and find information.

As a matter of fact, most of the population of the town are British ex-pats. Signs are in English, shop keepers speak English and even the Spanish residents speak English.

The weather in Los Gigantes, Tenerife is temperate year-round. The Los Gigantes weather does not vary too much no matter which time of year you visit.

Los Gigantes weather has two seasons, the hot summer and the warm winters, thanks to its location in the Atlantic Ocean, it always has a breeze. The infamous Tradewinds of the region can get quite blustery at times but that is part of the charm of the Canary Islands.

The rainy season is December. Our live webcam of Los Gigantes Tenerife will let you watch the weather year-round and enjoy the 300 on average sunny days!

This quaint holiday getaway region is the perfect place to sit back and relax and people watch and just take in the scenery.

Watching the boats pass by, catching a glimpse of a pod of dolphins or whales and just contemplating life are all favorite past times that you can experience with your bird’s eye view of the coast from the Royal Sun Resort HD webcam.