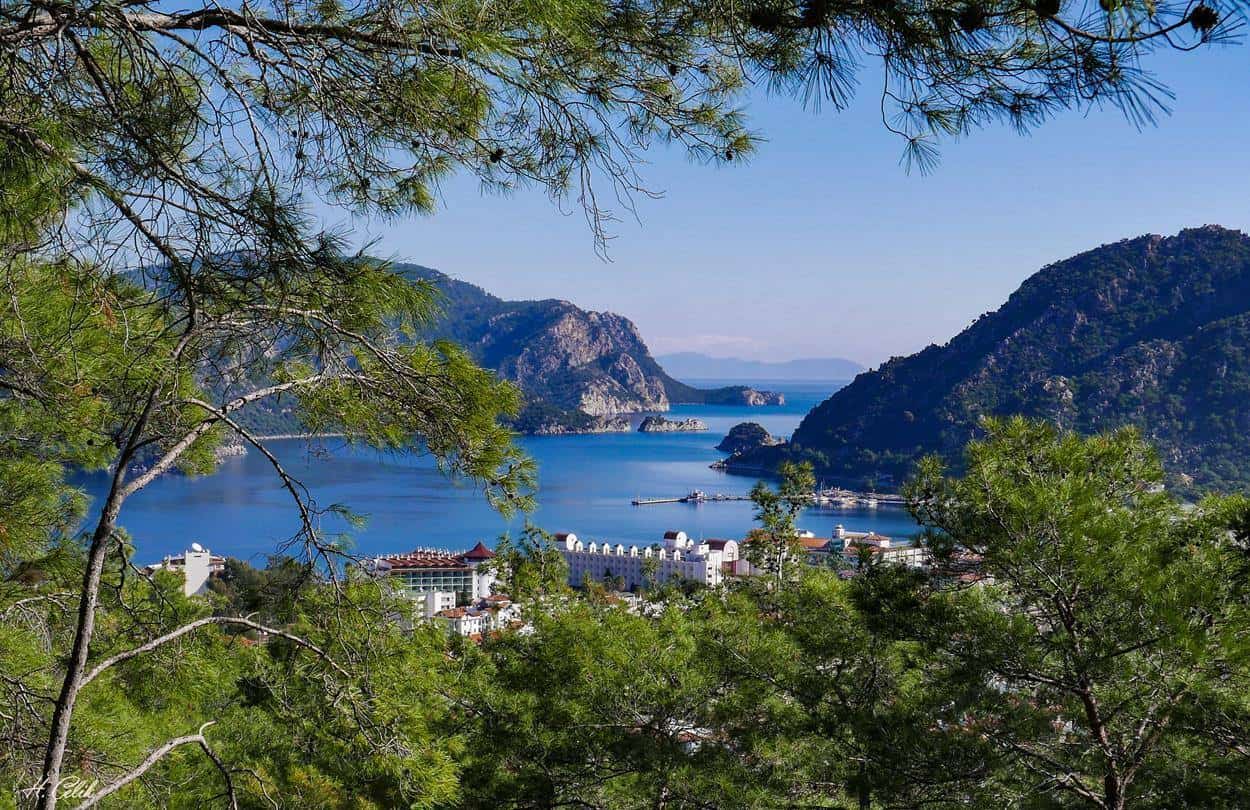 Icmeler might not sound familiar, but if I tell you that it’s a popular Turkish holiday resort, you might have an idea about exactly what the city can offer. But depending on your experiences with the country, you might be surprised that Icmeler is surrounded by pine forests all around, continuing up the mountains, with only a long stretch of beach breaking the mould.

Icmeler is not known for a booming nightclub scene, but if you have a soft spot for exploration, you will feel right at home. You can take a boat trip to a nearby island, savor fresh seafood in a beachside cafe, or just soak up the sun, accompanied by beautiful scenery all the way through.

A short stroll up from the coast along the canal, past charming bars and small boats moored by beautiful gardens, is where you can marvel the ancient Lycian tombs – the place is breathtaking.

Calling Icmeler a holiday resort is not an exaggeration either. No matter which hotel you choose for your stay, it will instantly set the mood. Everything you would expect is included, from pretty lights to palm trees.

The restaurants are great too, dive straight in the Turkish cuisine, and enjoy the complete atmosphere. You are not missing out on the culture either – the Kings Tombs, found on the side of a nearby mountain have a real mystery to them. With a quick glance you might even miss them at first, but don’t be mistaken, the tombs are highly detailed and wonderfully preserved.

You can also relax at the Turtle Beach, where you can enjoy clear water, an occasional visit by a real turtle, bars, restaurants, and even a mini-market.

A short trip away from Icmeler is Marmaris, a port city that has quite a bit to offer too. For example, in 2018, a 2300-year-old tomb of the Diagoras of Rhodes, who was an ancient Greek boxer from the 5th century BC was discovered. Up until then, the structure was believed to be a holy site.

Another such place of worship, that has been used since ancient times, is the Nimara Cave, found on the Heaven Island.

Another great location has to be the Marmaris Castle, which is the only huge historical landmark of the city of Marmaris itself. It is also the only museum found in town. It is believed to be built in 1044 BC and later restored during the era of Alexander the Great.

The landscape in the castle is outstanding, as it overlooks the Marmaris bay, with clear water and distant scenic mountains. In the castle is the Archaeology Museum that hosts seven indoor areas, which include archeology and ethnography lounges, the rest dedicated to art galleries, and storage. The museum might be worth a look if you decide to visit the castle.

Once back in Icmeler, the beach might be the best resting spot as it comes with a wide sand and shingle beach that curves around the entire bay.

It is lined with shops, bars, restaurants, and hotels, so you can freely spend an entire day on the beach without even thinking of leaving, but if you feel like exploring, the town shines when you tackle it on foot. You can reach the old village via a 15-minute walk from the city center, or you can climb up the woody mountains for a nice view of the city.

Icmeler is in a pristine location, not only the weather and nature surrounding it is great, but you are also able to enjoy both Turkey and Greece, as the island of Rhodes is just a short boat trip away.

The sunshine percentage staying at the solid 100% throughout summer also means that if you decide to grab a plane to Icmeler, you’re almost guaranteed to have great temperature, clear skies, and beautiful beaches. But if it’s not the time for a vacation just yet, feel free to take a look by using one of the free live webcams on our site!