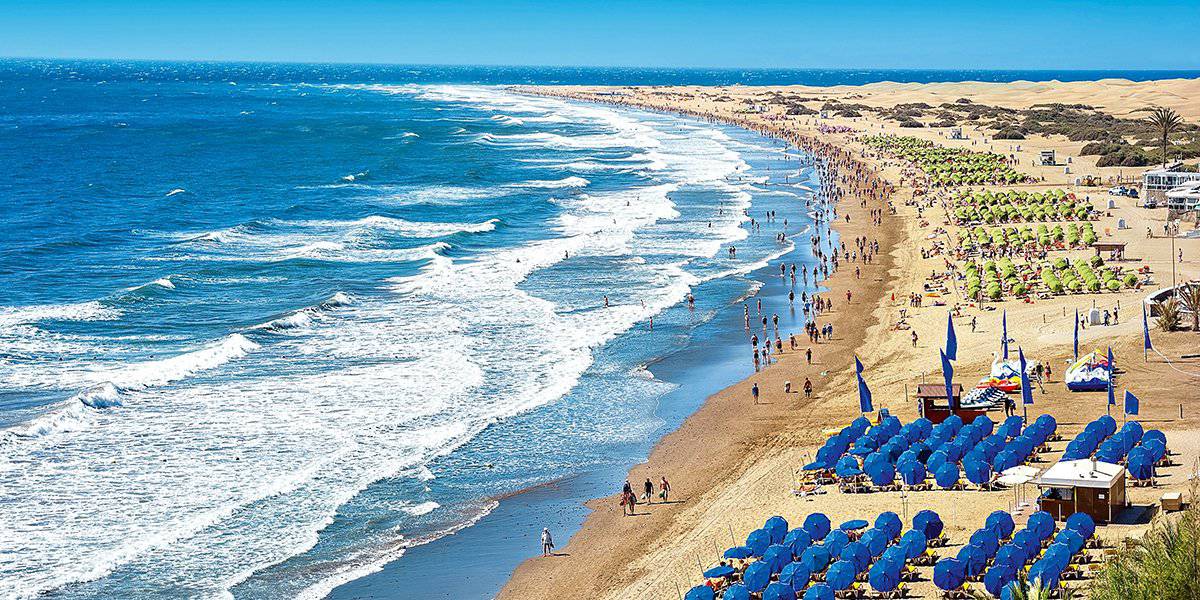 Gran Canaria is one of the Spanish Canary Islands, located off the coast of Africa. The Grand Canary Islands are famous holiday destination spots for world travelers.

Gran Canaria is the 3rd largest island in the chain. It is also has the third highest altitude and the third largest population but do not think of it as number three when it comes to great destinations in the island chain. Over 3 million people visit annually.

There are over 32 natural areas that are protected to help keep them pristine.

Our live webcam of Gran Canaria is pointing at one of the most famous beaches in Gran Canaria. The Pozo Izquierdo Beach is a hot spot of activity. This island just Southwest of Tenerife is a natural beauty and the black sand beaches are part of that beauty.

The natural black sand comes from the islands origin as a volcanic outcropping. This island has a desert climate due to its low amounts of precipitation through out the year.

The Gran Canaria is also known for its micro climates and often referred to as a “min-continent” because of the different climates that you can experience on the island.

While the coast rarely sees temperatures below 10 degrees Celsius, the mountainous areas and higher elevations have been known to experience frost and even snow during the winter months. Largely the coast stays warm year round.

Overall the island only experiences about 228 mm (9 inches) of rainfall annually hence the Desert climate designation. Many first time visitors are amazed that they are on an island and the humidity is so low!

The wind is a huge feature of this region. Wind turbines dot the landscape and generate much of the area’s electricity. One of the favorite activities on the Pozo Izquierdo Beach is wind surfing. The winter months do prove to be windier than the summer months.

The surf is not as rough as you will find on some areas of the island which makes it even better for wind surfing. For windsurfers this is the perfect spot in the world to windsurf, it is often compared to the Hawaiian island chain and what it means to surfers.

The colorful sails of the windsurfers add to the view of this famous beach.  The Gran Canaria webcam lets you watch all the surfers go by and makes you feel like you are right there on the beach.

While this beach is not ideal for sunbathing or swimming, it is the perfect spot for water spots and people watching. Called El Arsenal by the locals, this spot is very busy with windsurfers and kite surfers.

There are areas that are cordoned off with jetty’s that are safe spots for swimming but it is highly recommended that swimmers do not pass the jetty’s and get in the windsurfing traffic.

While the waves are not too high at this beach, it can be a bit tough to navigate at times because of the strong currents and of course the legendary winds.

Pozo Izquierdo offers windsurfing schools to help you become a windsurfer and enjoy the fun. It is home to the international windsurfing tour and draws large crowds to the beach to watch the action. Las Palmas is the capital city of Gran Canaria and home to the famous El Arsenal.

The webcam of Gran Canaria Maspalomas will help you to enjoy the beautiful ocean views of this popular resort town! People flock from around the world to visit this beach and relish in its beauty.

What do people do when they visit the area? Well, there is lots to do, there is something for everyone, whether you enjoy water sports or you enjoy being a spectator and people watch.

One of the reasons tourists return to this area year after year is because of the wide range of things to do and see.

There are ancient craters that you can hike around, beautiful vistas, plenty of outdoor activities, luxury resorts, great dining spots and so much more.

Maspalomas is the longest stretch of beach in the area where you can ride camels along the beach. A large part of the beach is desert which gives it a unique landscape.

The Dunes are a favorite tourist attraction. The natural dunes cover an area of 404-hectare (1,000-acre) and are a protected area. The dunes were formed during the last ice age when the wind swept the sand ashore from the bottom of the ocean. It is a very unique site.

Gran Canaria in general has a unique landscape including Roque Nublo a hikers favorite that delivers 360 degree views of the island. The volcanic formation of the island has created a terrain that is full of interest and intrigue.

The Vegueta is the center of town that is home to great examples of a mixed bag of architecture with Cathedral of Santa Ana and its gothic architecture the center of it all. Gran Canaria is known for its rugged terrain, great beaches, interesting history and its rum!

Arehucas rum is a favored liquor in the Gran Canaria and is featured in a wide range of cocktails around the island, it is also exported around the world and heralded for its smooth taste, visitors often make the trip to the distilleries to partake in some adult libations while visiting the island.

This eclectic vacation hot spot is also home to a wild west themed park that was originally built as a movie set than converted to a theme park. Sioux City Park if full of rough and tumble cowboys and fun things to do.

There are parks, nature preserves and so much more to do and see in this area that makes any holiday unforgettable.

The region is rich in history and was home to the Canarii people as early as 500BC as evidenced by artifacts that were found on the island. The Canarii called the island Tamarán “The Land of the Brave”.

Juan Rejon the head of the Castilian Army in the region coined the capital cities name as “Real de Las Palmas” in 1478.

Christopher Columbus stopped on the island when he made his famous journey to the new world in 1492. It became an important trade hub and eventually a tourist destination at the turn of the 19th century.

56,000 hectares are still forested areas on the island, before the Spanish invasion much of the island was forested, there has been a big push since 2000 at reforestation.

It is home to the first roadways of the Canary Islands that were built in the late 1800’s. This island has a strong infrastructure simply because it has been in place for so long.

There is an extensive network of bus transportation on the island that is public. The Gran Canaria Transport Authority, TGC manages the bus lines and the multiple bus stations scattered through out the island.

Giant wind turbines feed the island with electricity. The electric services is very reliable, which can be hard to find on some of the islands but here, electricity runs around the clock with little to no interruption.

Agriculture is not really a priority on the island anymore but at one time it was home to large sugar cane plantations and grain plantations. Of historical agricultural interest the Caves of Valeron are a testament to early agricultural grain storage systems.

Get to know this area, by viewing the webcams that are on around the clock and learn more about what Gran Canaria has to offer for your next holiday.