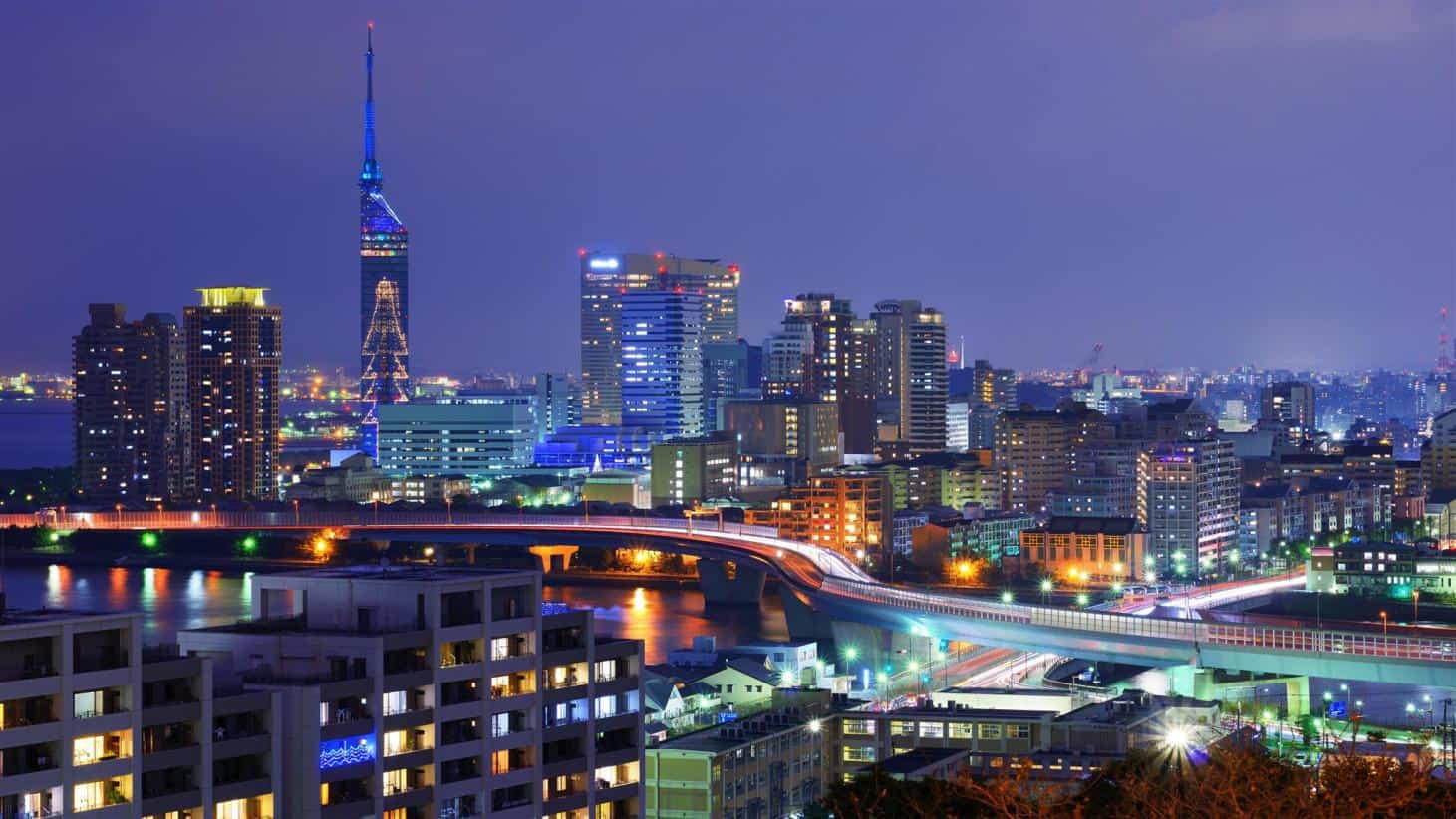 Situated on the northern shore of the Japanese island of Kyushu, the capital of the Fukuoka Prefecture, the city of Fukuoka is a metropolitan city full of castles, beaches, temples, plenty of unique food, and much more.

Fukuoka stands as a key location in the history of Japan, as it is believed to be the earliest place of settlement and the oldest city in the country. Nowadays, Fukuoka is one the most populous cities on the island, currently ranking 6th, above Kobe and Kyoto.

The latter is rather important, as, since the founding of Kyoto in 794, not a single place city to the west has surpassed it. Currently, Fukuoka is home to around 1.6 million people, and the greater region of the Fukuoka Prefecture houses over 5 million in total.

Standings as a historic city, Fukuoka has plenty of heritage to explore. For example, the Fukuoka Castle is a great start to exploring the long history of the city. Sometimes also known as the Seki or Maizuru Castle, it’s a wonderful example of how royalty enjoyed living around the 17th-century, with a preference for hilltop homes.

The elevated white and blue exterior of the castle is astonishing and quickly catches your eye. And while the current castle might look rather impressive, it is just a small glimpse into what stood there years prior, as the original castle was estimated to occupy 47,000 square meters, with what remains only being a tiny fraction.

Said that there is still plenty to see, with parts of the original castle gates, towers, and turrets. A lot of the wall also spreads out into Maizuru Park.

Continuing with the theme of grandeur and antiquity, the Dazaifu Tenman-gū shrine is one of the largest shrines in the city, spanning around 3000 acres. The shrine is dedicated to the god of education, so is well known and loved by students, who visit the shrine in hopes of passing their exams.

The key structure is the Honden, or the main shrine, which originates from around 905 AD. Being so old, it has been replaced and restored many times, with the current one standing since 1591. The location also features smaller shrines and more importantly a treasury where most of the old artifacts are kept.

As the shrine covers quite a bit of area, you’ll also find bridges, gardens, ponds, and around 6000 plum treas, with an addiction to a local delicacy, the umegae mochi, made out of grilled adzuki beans.

The key aspect of the location is the giant bronze Buddha, which has been here since 1995. It is said to be the largest bronze statue in the world. If the bronze Buddha stood up next to the Statue of Liberty, the Buddha would be taller.

Around the shrine, you’ll also find plenty of picturesque paths that also feature smaller Buddha statues, some wooden ones being notable and worth a visit, one of which dates back to 806 AD.

Every Japanese prefecture differentiates itself by many things, but the most exciting has to be food. When it comes to Fukuoka and its prefecture, the food is absolutely amazing.

For example, a member of the local cuisine, the hot pot known as Mizutaki, uses a painstakingly prepared broth made out of chicken, which is then blended with lightly seasoned soup, and while its the best during a chilly winter or autumn evening, it is served all across town year-round.

Another great local specialty, the Motsu Nabe (nabe standing for hot pot) is a popular dish revered for its flavor. Jam-packed with vegetables it is greatly enjoyed during the hot summer days and if you feel like going for a light winter pick me up, it’s just as valid of an option.

Fukuoka, like many other places in Japan, have so much to offer it is hard to fit into any amount of words. From its ancient to modern architecture to its food and culture, celebrations, and its people.

The city and the region are worth a visit, and if the many Korean tourists from Busan haven’t earned your trust just yet, feel free to take a closer look by using one of the free webcams you can find on this site!