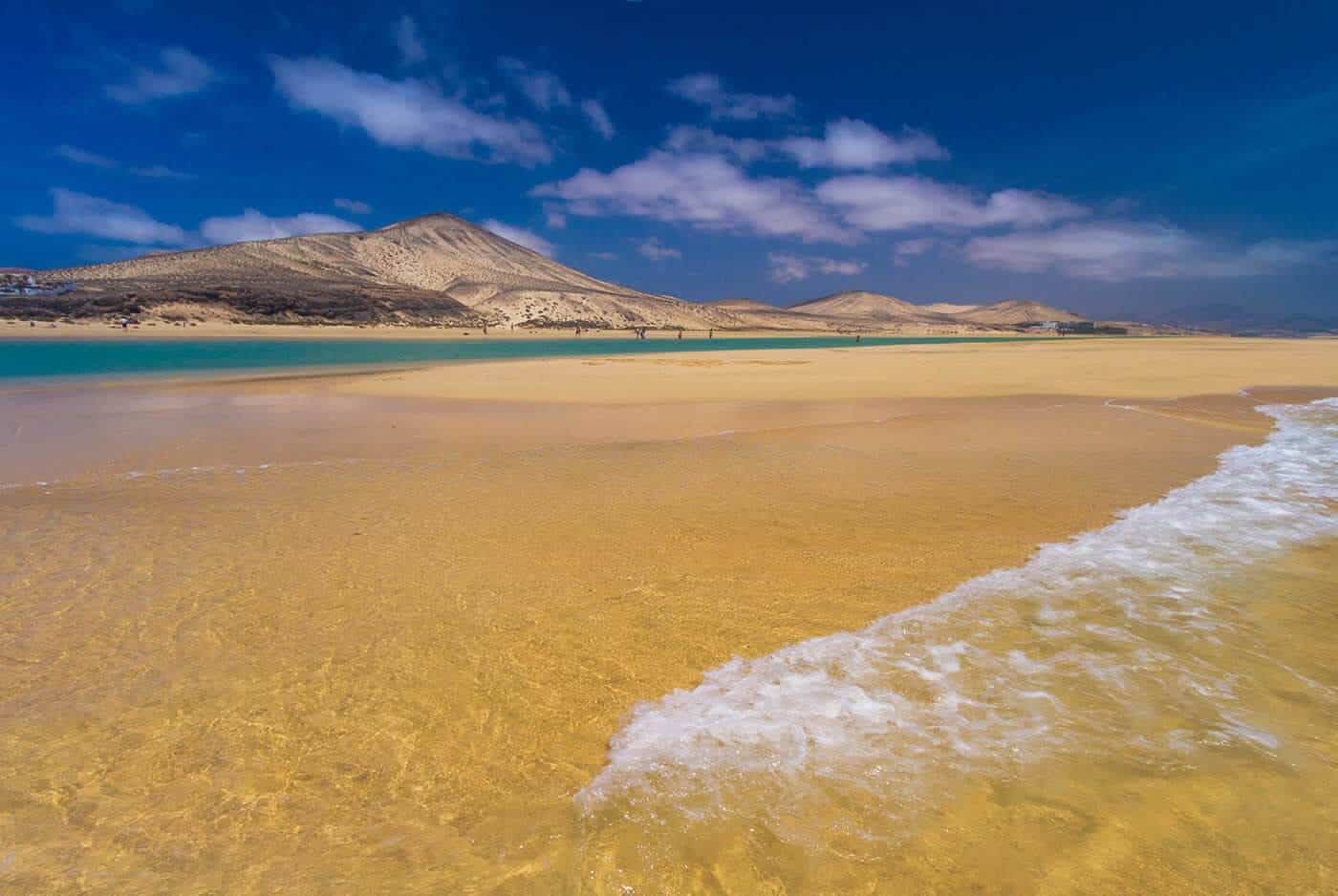 Watch the Windsurfers on the Webcam in Fuerteventura!

Our Fuerteventura webcam will give you the eagle eye view of this beautiful area and put you right in middle of the windsurfing action. We have a webcam in Fuerteventura near Costa Calma.

Costa Calma is a holiday resort on the island Fuerteventura and island in the Canary Islands. Since the 1970’s Costa Calma Costa is at the tip of the Jandia Peninsula at the southern end of the island.

Costa Calma was named as such because of the calm waters. The webcam of Fuerteventura, Costa Calma gives viewers the opportunity to witness this beautiful bay area that hosts windsurfers and kite surfers from around the world.

The exceptional weather in Fuerteventura is enjoyed by visitors each year. It’s very close proximity to the African continent means you can expect warm to hot temperatures through out the year.

Temperatures rarely fall below 21°C and 23°C during the “winter” months and can reach highs of 28°C during the summer months. There are times when the temperature can temporarily be raised by about 10 degrees Celsius due to the Calma.

The Calima is a sand storm that can impeded visibility and bring a coating fine red dust to the island. It does not happen frequently but when it does, everyone is encouraged to stay inside until the storm passes.

Overall if you had to pick a spot for a holiday and you wanted the closest you could get to a guarantee that the weather would be wonderful Fuerteventura is a good bet. The island experiences over 3000 hours of sunshine each year.

The beautiful climate has earned the island the nickname “the island of the eternal spring”.

Rainfall amounts climb in the month of December, but the island sees very little rainfall overall with each year only bringing about 147 mm. The dry Sahara winds that blow through the island keep the climate on the arid side with very little humidity.

Fuerteventura is known for its prevailing trade winds that blow year-round bringing a lovely cool breeze to the island and of course supporting all the windsurfing and kite surfing that the island is known for.

Fuerteventura is the second largest Canary Island behind Tenerife and has long been heralded as a holiday destination. Tourism is the biggest economy in the region.

Europeans and travelers from around the world flock to this island chain to enjoy the warm sunny days, beautiful white sand beaches on Calma Costa and to participate in all the great outdoor activities that are available.

Fuerteventura is 1,660 square kilometers’ (640 sq. mi). The name of the island refers to the winds that surround the island and the danger that they presented to early sailors.

Costa Calma is one area of the island that does not have to deal with excessive windy conditions because of the natural protection that the island provides.

Unlike other islands in the chain Fuerteventura has relatively flat topography. Many of the other Canary Islands are hilly with rough terrain.

This island has seen its share of strife from invaders starting as early as the 1300’s with the French. There were numerous pirate raids of the island and other discourse in early modern times.

Castles dot the landscape of Fuerteventura that were built to protect the island from invaders. By 1852 the island was established enough that Queen Isabella of Spain included it in part of a free trade agreement.

By the 1940’s, solid infrastructure was in place including an airport which of course started the foundation of the huge tourism trade that the island enjoys.

Costa Calma was born 20 years later and designed to be a tourist hot spot. Quality Coast International Certification Program of the European Coastal and Marine Union lists the region as one of the 500 best beaches to visit in the world.

The island is the oldest in the chain and was formed around 20 million years ago.

This region is a huge tourist draw because it has the longest stretch of white sand beaches in all the archipelago. The island is largely divided into two sections the northern section and the southern section. Pico de la Zarza is the highest point on the island at 807m.

No doubt that the biggest draw to the island is the beautiful beaches including Costa Calma but there is other reason that people flock to this holiday destination. It is home to the Canarian Egyptian Vulture which is an endangered species that is only found in one other region.

While the climate is arid you would not know it from the varied insect population that includes beautiful butterflies, dragon flies and more that are colorful. Large hawk moths and more flutter around adding interest to the natural beauty.

The island, like most islands in the chain, are inhabited by many lizards that scurry around on the rocks. Squirrels and a wide range of birds call the island home as well. Migratory birds often stop by to rest their wings on their way to their destination.

Marine life is abundant in the area and is an interesting combination of Mediterranean marine life, Atlantic Ocean marine life and of course the endemic species of the Canary Islands. Our webcam gives you sweeping views of the coast can help you to catch images of the whales that swim by, the dolphins and more.

Tourists are mesmerized by the marine life in the area. Sea Turtles, Starfish, Octopus, various Shark species and so many more species are in the waters off the coast of the Costa Calma. It is a variable natural aquarium for over 500 species of marine life.

Costa Calma is one in a string of beaches that are connected during low tide. This resort town is a favorite destination of Germans and many of the hotels, cafes and shops are owned by German expats. The town itself is rich with hotels, shopping, eateries and more to keep visitors busy.

Oasis Park Zoo is adjacent to the Botanical Garden and makes for a great day trip. It opened in 1985 and delivers plenty of opportunities to get some hands-on experience with animals.

It offers scheduled shows that spotlight sea lions, birds and more. It has a kid’s park section where children can interact with animals. It offers “animal experiences” and more. It is a zoo/conservation center that is right in line with the Canary Islands commitment to preserving the region and protecting animal species.

There are 6 beaches that line the Costa Calma coast, the beaches are all connected during low tide which makes it easy to find your perfect spot. At high tide the beaches are separated by the breakwaters. Some of the beaches have beach side bars that serve adult beverages.

The beaches are popular spots for families because of the calm shallow waters which are easy to swim in and safe for small children. These beaches are also popular with water sports enthusiasts and couples as well because of their natural beauty and sport opportunities.

The clear blue green waters of the region are simply stunning and host a wide range of activities. Deep sea fishing, snorkeling, windsurfing for beginners, intermediates and the pros, quad buggy safaris are popular and other activities are abundant. If you love the beach, people watching, adventure, Costa Calma is the place you want to go for holiday.

This resort town was purposefully designed to attract tourists. The full-time population of the region is largely made up of people that came on a holiday, fell in love with the region then moved back permanently.

There are several examples of the town’s original architecture but for the most part everything you find on this part of the island has been built for tourism purposes.

There are some good restaurants that serve fresh seafood prepared to perfection. Some of the restaurants are transformed into nightclubs complete with dance floors to entice visitors to let their hair down and stay awhile.

Most tourists come to take advantage of the rest and relaxation that they can find at Costa Calma. It is a great opportunity to reconnect with family and friends and breath in the salty ocean air. This island has a way of helping people to feel renewed after a holiday.

This is a great region to visit, and If you cannot get there right now in person, our webcam can help you to get their virtually. View from anywhere you have an internet connection and take a break from life!