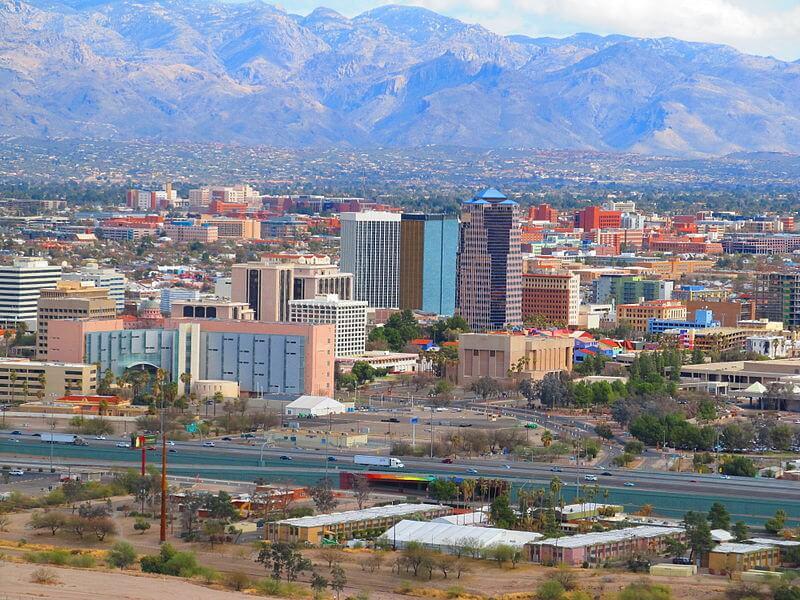 Webcams of Tucson in Arizona

See Tucson in HD with our live Tucson webcams! Tucson is a city in Arizona in the USA. This city is a true gem. From the stunning landscape to the free-spirited people it is a wonderful place to visit. The landscape alone is enough to draw you in.

The landscape is rich with amazing vegetation that you would be hard pressed to find anywhere outside this region. The giant cactus and other unusual vegetation are stunning and looks otherworldly.

Tucson is the second largest city in Arizona behind Phoenix! It has been inhabited since the Paleo-Indians arrived there about 12000 years ago.

Recently a village site dating back to 2100 BC was uncovered at the Santa Cruz River, other indications of early agriculture in the area date back to 1200 BC to about 150AD. Pottery vessels from 600AD to around 1400AD have been discovered at archaeological site around Tucson.

Hugo O’Connor is accredited with being the founding father of the city and authorized the construction of the first fort to protect the city in 1775 from attacks from native tribes including the Apaches. It was a part of the Mexican state of Sonora until the US won it back.

This is a rugged region that has certainly saw its share of disputes, attacks and tough times. It is rich not only in Native American history, but it is rich in Western American history. It was a huge influence on western movies and was home to a profitable movie studio business for many years when westerns were in their heyday.

Tombstone right outside of Tucson is a legendary town because of the boom it experienced in the gold rush years, although gold was not really a big find, silver was.

Tombstone is no longer a bustling western town, instead it is a tourist attraction that is a short drive from Tucson. Visitors can see firsthand exactly what a wild west town looked like!

At every turn there is an opportunity to view something of historical impact whether it is the Catholic missionary buildings, the forts, the Native American museums, the museums with artifacts from ancient indigenous people, there is tons of history in this area that is only rivaled by the natural beauty of the landscape.

The architecture in many areas has the obvious Spanish influence of adobe style. There are plenty of “nationally recognized historic buildings” around Tucson that are interesting to view.

There is plenty to keep you busy in Tucson from the expected metropolitan stuff like museums, theaters and restaurants to the unexpected like the star gazing at the Kitt Peak Observatory. This is an exciting city with a lot to discover. The Colossal Cave Museum Park is another delight and completely unexpected!

The food is primarily Tex-Mex with a leaning toward authentic Mexican flavors. If you love spicy food, you will love Tucson! Of course, there are plenty of dining options that offer other culinary flavors, this is after all Arizona, where like the rest of the US there is an eclectic melting pot of people and flavors!

The University of Arizona is in Tucson and offers a great art museum that shares different collections, a great theater group and other cultural interests.

Tucson is a wonderous place and the wonder of it is exemplified when you see it at both dawn and dusk. The colors of the desert come to life and reflect on the city skyline. It is a stunning sight that is unforgettable.

View sunset on our HD web cam of Tucson and then come back and catch the sun rise. Did we mention that Tucson has 330 days of sun every year? When you are feeling down, there is no better way to pick yourself than watch all that sunshine bath the city!

Main Attractions: historic sites, the desert, the mountain ranges, the 10-acre lake at JF Kennedy Park and so much more!