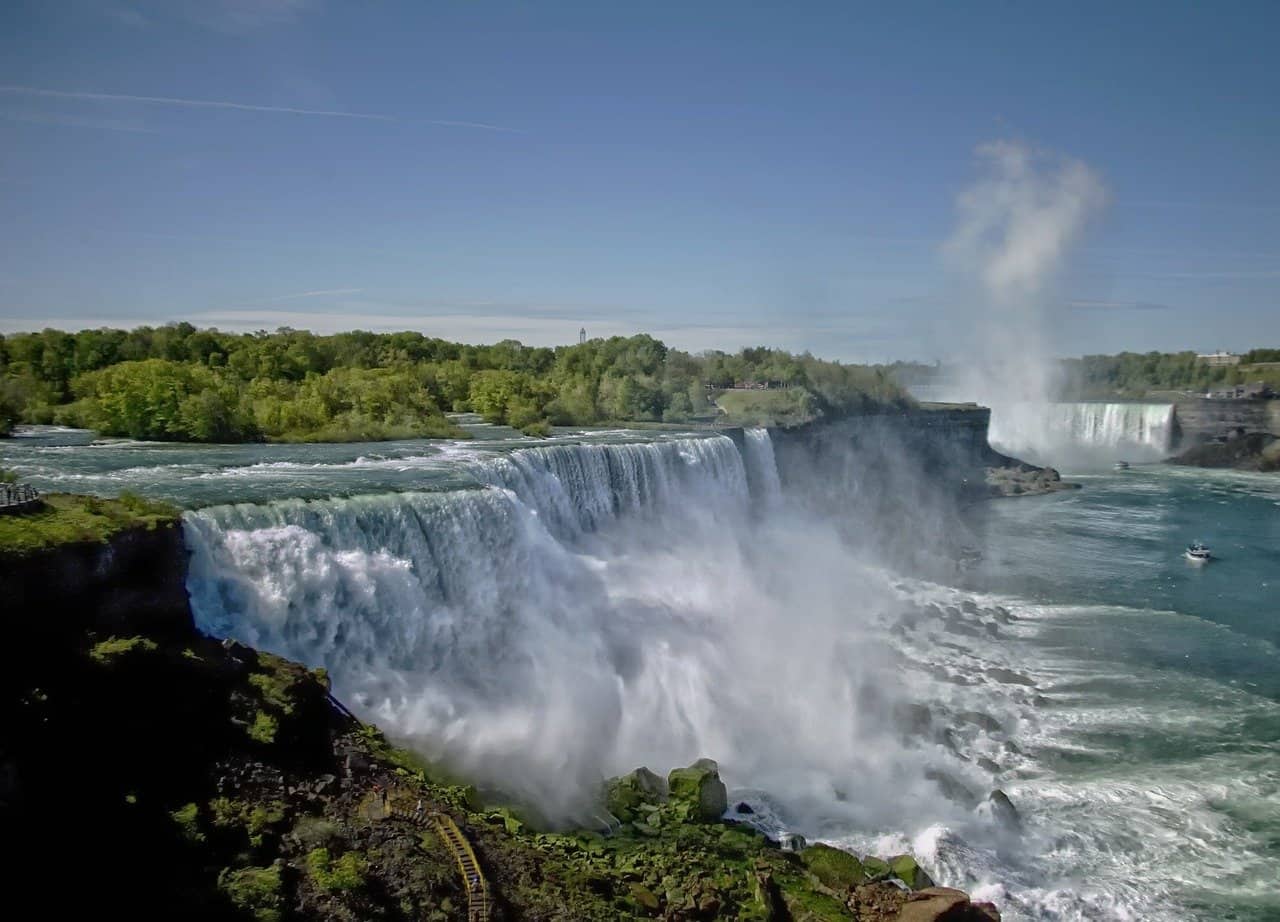 It is the boundary between the United States and Canada. There are falls on both sides.

The United States side is in the upper most part of New York State.

The falls are the natural international boundary line between Canada and the US. With each country taking responsibility for the conservation and protection of their side of the falls.

Most people associate the falls with the NYS side of the falls.

About 10000 years ago when the falls were younger, they were situated about 8 miles further north but because of the natural erosion of their crest from the power of the falls they have slid down south.

Today it is estimated that the erosion rate is about 1 foot per year which means in about 50,000 years it will have totally eroded and cease to exist!

The name Niagara Falls is a mystery, there are several scholars that have come up with the origins of the name, but they attribute to completely different native American tribes.

We do know that that name likely did come from a Native Tribe but there is no solid historical record as to which tribe coined the name or whether it was even a Native American Tribe or an Indigenous people of Canada that coined the name.

Of course, there is also the “who saw it first” mystery of the falls as well. Explorers of the time like Samuel de Champlain, Pehr Kalm, Louis Hennepin and others have all been credited with “discovering” the falls.

Ultimately, each likely did come across the falls on their travels but the record is a little questionable as to who did first.

The falls come from the Niagara River which is fed by the Great Lakes. Power is harnessed from this powerful body of water and supplies much of New York State and Ontario Canada with electricity.

There are large hydroelectric generators that utilize the power of the falls to create energy for millions of electricity customers on both sides of the falls.

The falls have the largest fall rate of any waterfall in the North America. With six million cubic feet of water falling over the falls every minute of every day!

The record fall rate exceeded seven million cubic feet.  The flow peaks in late spring or early summer and the flow rate can increase substantially during that period, depending on how much ice melt there is and how high Lake Erie is at the time. In any case, the flow rate is tremendous and powerful.

Contrary to popular belief while the falls do freeze over there is only one recorded event when the falls completely stopped because they were frozen and that was in 1848 because of an ice jam.

Typically, in the coldest part of the winter the top layer of the falls will freeze giving the impression that the falls are frozen but the underlayers are still flowing along nicely!

It is the 8th Natural Wonder of the World.

While it is not the highest falls, it is simply spectacular. At night flood lights are used to highlight the falls in different colors.

There is a long history of crazy stunts attached to the falls. Many people have gone over the falls in a barrel. Many people did not live to tell the tale.

The stewards of the falls have had a difficult time finding the balance of recreation, natural preservation and industrial use and many laws and regulations have come and gone over the years on both sides of the falls in the attempt to find that balance.

There is a wide range effort on both sides of the falls to protect the natural beauty of the falls while managing the industrial use of the falls. Typically, conservation wins out when there is a question as to whether an industrial activity, like building more power plants is good for the environment of the falls.

In the early part of the 1900’s when conservation was less of a concern, the falls did go through a period of pollution from industrial waste that was generated upstream, but it was quickly resolved, and conscious effort began to ensure that it would never happen again.

Both Canada and the US agree that the falls must always remain protected from industrial waste and pollution. The falls are governed by the 1950 Niagara Treaty and they have their own counsel in place with members from both the US and Canada to ensure that each party is doing as promised with the falls.

The falls on the US side are surrounded by one of the first National Parks with beautiful natural areas that are protected.

Millions of people from around the globe visit the falls annually. You can “visit” to via the Niagara Falls live feed.

Main Attraction: The falls and the parks surrounding them.